New pedal-powered treasure hunt aims to get the city cycling

CamcycleQuest is a treasure hunt with a difference. The new clue-based quest has been designed specifically to be done by cycle. Hosted by local cycling charity Camcycle, in association with law firm Tees, CamcycleQuest was officially launched on Monday 29 July at 10.30am on Parker’s Piece, where the first answers to the quest can be found. From there, participants are directed on a pleasant loop around Cambridge, exploring new sides to the city and discovering many quieter and off-road cycle routes along the way. 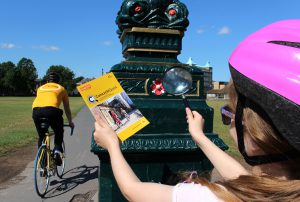 As well as being an ideal summer activity to do with family and friends, CamcycleQuest also has a competitive element. Participants who add up the answers to the series of special clues will be entered into a prize draw with the chance to win goodies including a £900 cargo bike e-conversion from Electric Bike Sales, and cycling accessories from Rutland Cycling, Kingsway Cycles, Mill Road’s Cam Cycles and Cambridge Chamois Cream. Winners will be drawn at 2pm at Camcycle’s Cargo Carnival, held on Lammas Land on Saturday 21 September and part of the month-long Cambridge Festival of Cycling.

The route and clues for the quest have been developed by Camcycle member and volunteer David Earl, who has been helping to get more people cycling for over 25 years. He said, “I hope people get as much enjoyment from solving the clues as I did collecting them, and discover some bits of Cambridge they’ve not been to before. By cycle, it’s possible to range much further than on foot, and the off-road paths give access to many beautiful corners of the city that are inaccessible by car.” 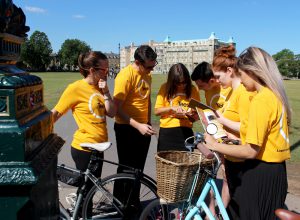 The team from Tees are also keen to spread the joy of cycling through their involvement with the project. “Cycling is already very much a part of Cambridge’s identity,” says Janine Collier, Executive Partner at Tees. “However, any action that will encourage even more people to start using their bikes, especially with the environment and climate change now so high on the agenda, is highly deserving of support and we’re very happy to be sponsoring CamcycleQuest this summer.”

The whole quest will take around a day to complete, but can also be done in sections. Employees at Tees will be taking part as a team and encourage other businesses to get involved too in a bid to share the joy of cycling between colleagues. The CamcycleQuest corporate challenge will celebrate the organisation that gets the most employees out cycling. Guides will be available from a Camcycle stall outside the John Lewis café on Thursday 8 August (National Cycle to Work Day) and can also be purchased from outlets around town including The Cambridge Gift Shop in the Guildhall, Outspoken Cycles, Townsends Light Blue Cycle Centre and Rutland Cycling’s stores at Cambridge Station and in the Grand Arcade. Alternatively, participants can purchase individual copies online at or arrange bulk and wholesale orders by contacting Camcycle direct.

Camcycle and Tees are keen to find out how participants get on during the quest so encourage cyclists to post their progress on social media using the #CamcycleQuest hashtag. More information can be found on the CamcycleQuest Twitter account and on the website at www.cambridgefestivalofcycling.org/camcyclequest

Camcycle’s Executive Director, Roxanne De Beaux, is grateful to all those who have helped bring this project to reality and hopes it inspires many more people to continue cycling after the competition is over. She said, “I’d like to thank our Camcycle staff and volunteers for their hard work to produce the beautiful CamcycleQuest guide. Special thanks also goes to Tees Law for supporting our vision and helping us bring CamcycleQuest to life. We couldn’t have achieved this without them. I hope the quest inspires people to take to their bikes, tricycles and tandems this summer to explore Cambridge and continue on afterwards to even more cycling adventures.”