CamcycleTech unites cyclists of all ages at Cambridge Museum of Technology

Over 180 people explored cycle science, design and technology at CamcycleTech, a new event for the 2019 Cambridge Festival of Cycling, which took place on Saturday (7 September). Held at the Cambridge Museum of Technology, the event was organised by local charity Camcycle and included virtual cycle racing, a programme of speakers, investigations into the physics of cycling, a bike display area and cycle-themed craft activities.

The museum’s Pye building, home to examples of some of the company’s iconic radios, was the location for the speaker programme which saw talks on high-performance cycle design, physics and transcontinental racing. The room was packed for the presentation by Mike Burrows, the engineer behind the iconic Lotus Sport bike at the 1992 Olympic Games. The bike’s revolutionary design helped Chris Boardman claim Britain’s first cycling gold medal in 72 years and paved the way for a successful wave of British cyclists. Mike said his long quest for efficiency in cycle design was his search for eternal youth, showing that even today, aged 76, his average speed was increasing thanks to annual improvements on his own-designed cycles. 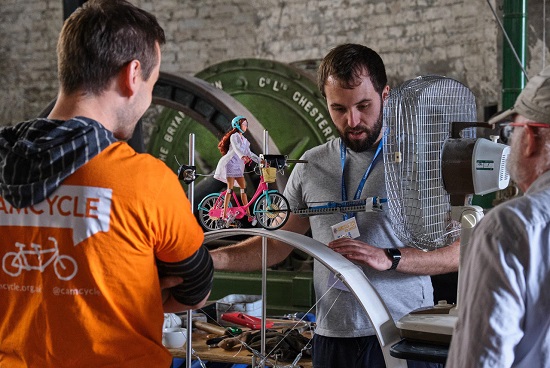 In the top bay area, Jacob Butler from the Cavendish Laboratory had utilised a Barbie on a bike to demonstrate the physics of rolling resistance (above) while Jinx StLeger, education officer at the Cambridge Museum of Technology, helped families with art and craft activities. The riverside pump yard hosted a display of vintage and unusual cycles and visitors could race each other on the Zwift virtual training system which overlooked the gas engine.

Chris Amory, who visited the event in the afternoon, said “I just hadn’t appreciated what a variety of bicycles there were. The range of engineering on display was ingenious and the cycles in the bike display area were clearly explained by Alan, the Camcycle volunteer there. It was well worth coming along.” Oscar Emerson, 13, also said he had enjoyed the event, particularly the talks, the wind-tunnel demonstration in the physics area and the virtual cycle racing.

Camcycle and the Cambridge Museum of Technology hope to make CamcycleTech an annual event and are keen to work with local technology partners to make it even bigger and better next year. Meanwhile, the Cambridge Festival of Cycling continues this week with events and activities from Camcycle and local partner organisations including Childerley, near Dry Drayton whose beautiful gardens are hosting The Handlebards cycling Shakespeare company on Sunday 15 September. You can find full details of this event and all the other activities taking place during the festival at www.cambridgefestivalofcycling.org