Over 120 people joined the cycle parade around Cambridge for Camcycle’s third Cargo Carnival on Saturday 24 September, the flagship event of the 2022 Cambridge Festival of Cycling. Participants brought their box bikes, trailers, handcycles and tandems, bedecked with ribbons, flags and soft toys and carrying a range of cargo from ladders to library books. The procession began in the forecourt of Cambridge University Library and took in Lammas Land and Coe Fen before travelling up King’s Parade for two loops of the city centre to the sound of music, whistles and bicycle bells. 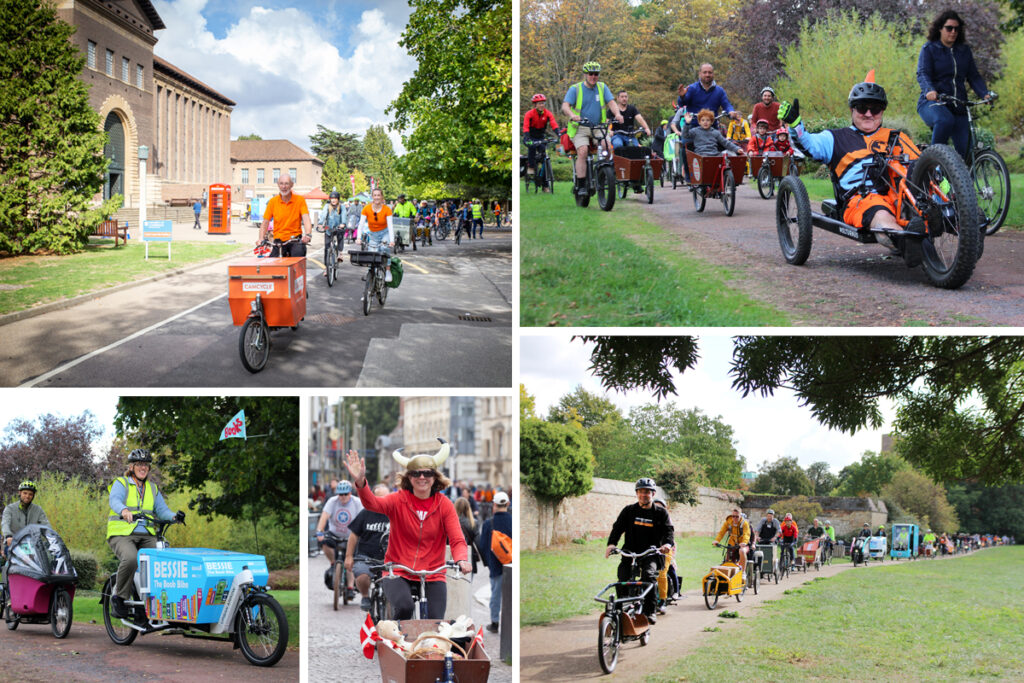 Once back at the University Library, a cargo fair of stalls and cycle tryouts began. A range of cargo bike options were available from Outspoken Cycles, Electric Bike Sales, the School Run Centre, Townsends, Cyclecentric and Conker of Cambridge. Steak and Honour, VG coffee and Ice Cream Dreams supplied refreshments, and other stallholders included Pedal and Brass, the Rolling Groundsman, Mike’s Bread, the Museum of Cambridge, David Parr House, Visit Cambridge and Cambridgeshire Libraries. Local businesses Gutter and Stars and Grape Britiannia also brought their cargo bikes along as part of the parade. 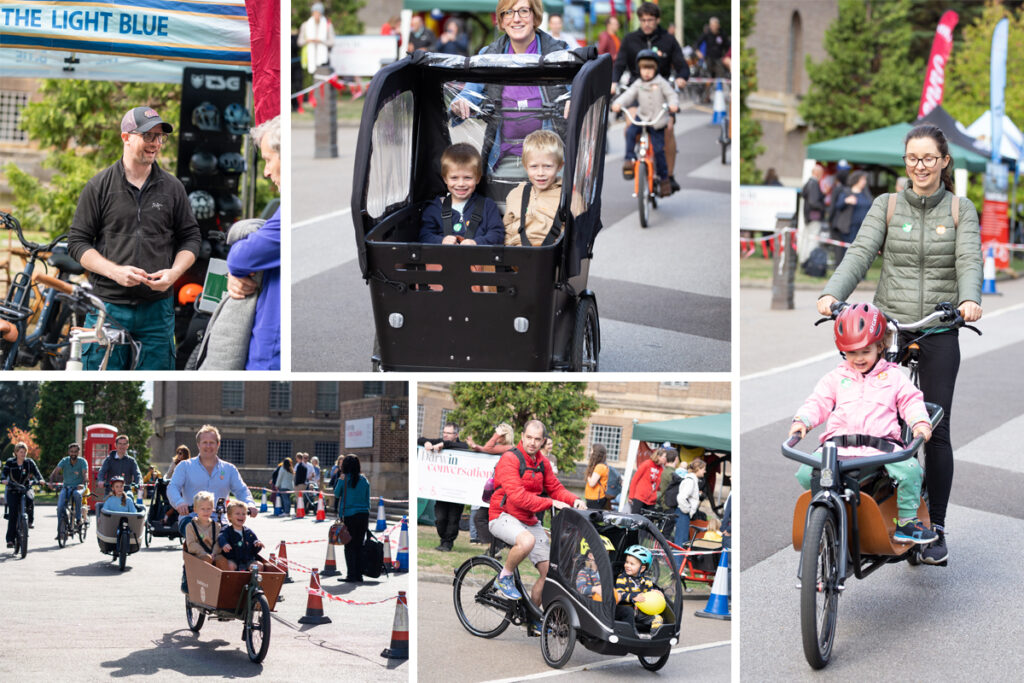 The last Cargo Carnival was held in 2019, before the Covid-19 pandemic, and there were a good number of familiar faces returning this year, but also several businesses and families joining the event for the first time. Kristina Östman, riding with two children on a Babboe Big cargo trike, said:

“The carnival was so much fun! Thanks for an amazing event.”

“We’ve only had a cargo bike for six months and it’s so nice to see so many other cargo bikes in one place and to try out some other cycles. It feels like there’s a real movement of people choosing to use them rather than cars. It was really good fun cycling through town to the noise of a hundred different bike bells and my son, who is five, had a great time sitting on the back and waving at people. Bringing children along, it just reinforces to them that lots of other people do this too: lots of other children love being on cargo bikes and lots of people use them for other things. I noticed lots of people smiling and waving at us and it may have encouraged them to think ‘What could I do with one of those myself?’” 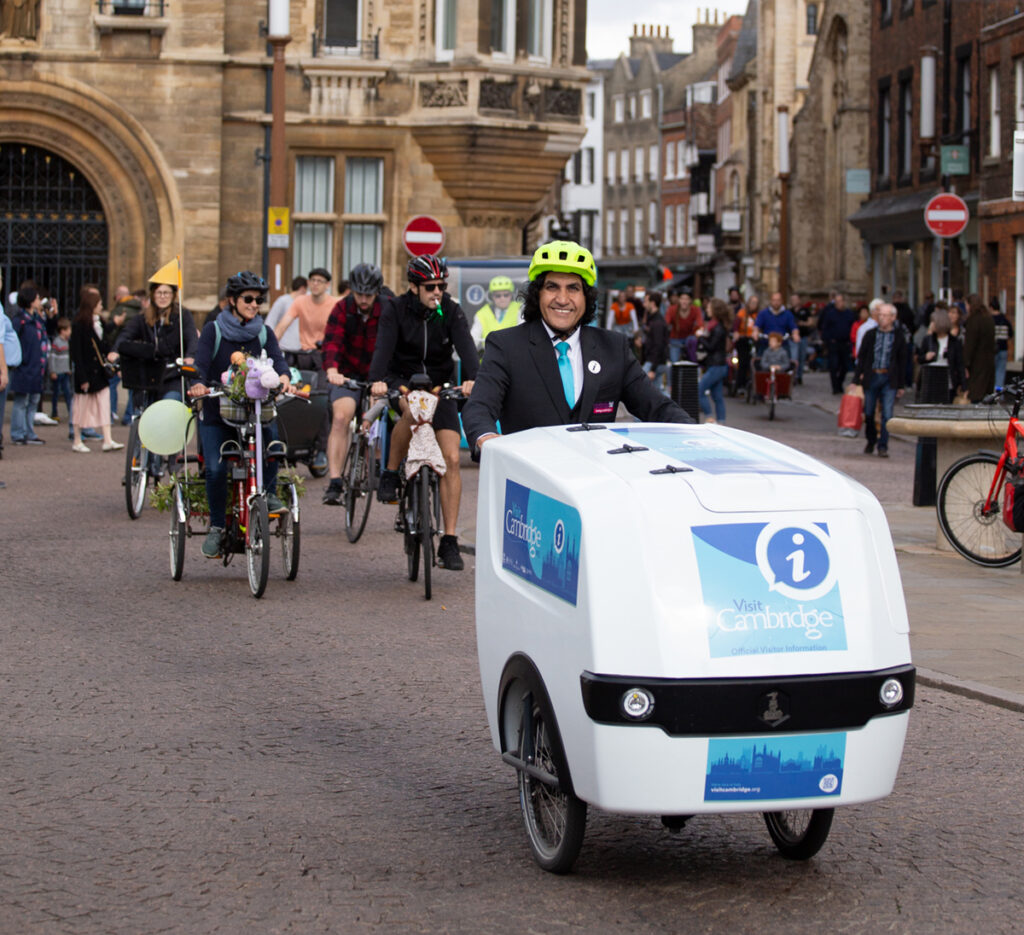 Taj Khan and Haydn Thorne from Visit Cambridge took part in the ride and fair with their two electric cargo bikes which they use to distribute maps and information to visitors and residents around the city. Their larger electric-assist mobile information vehicle was launched in Cambridge earlier in September. Taj said:

“The cargo parade was really amazing; I’d never experienced something like this before and I think it should happen more often! It’s a great way to show people that there are new, sustainable ways to get around the city and encourage more use of bikes, because that’s the way forward.” 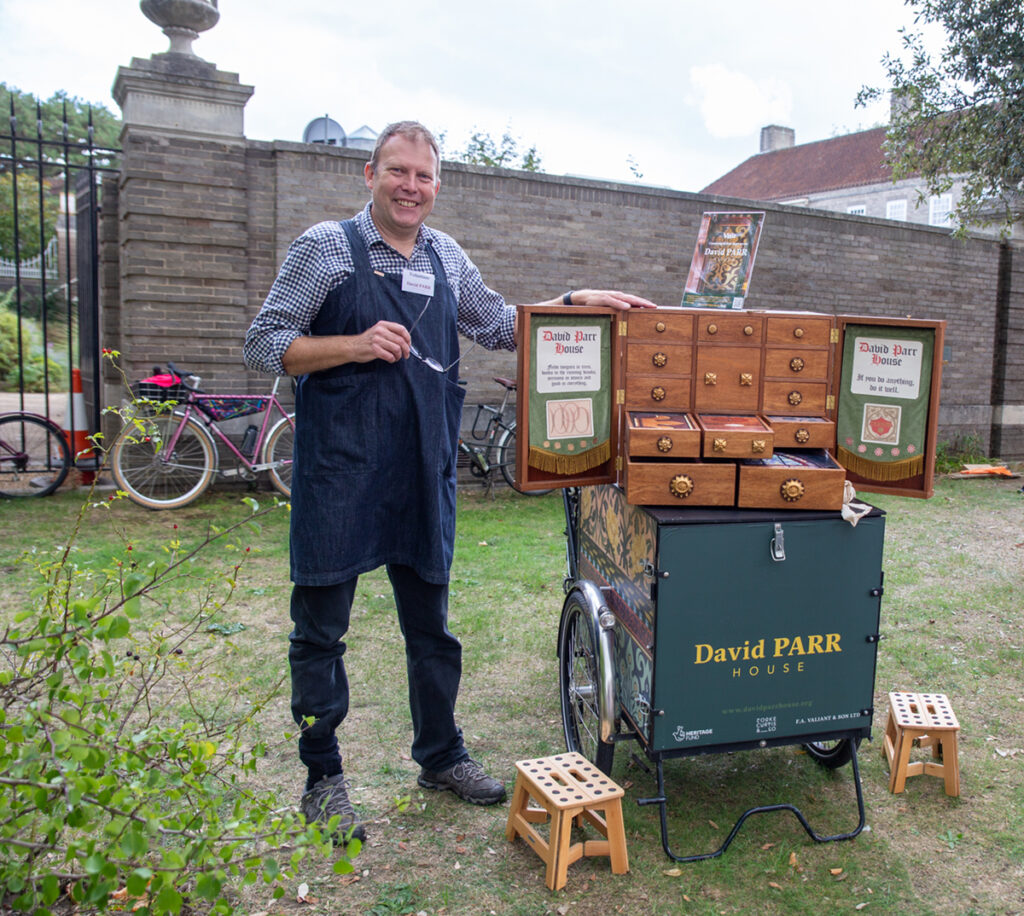 Andrew Entwistle, a volunteer for the David Parr House in Gwydir Street, brought along a selection of exhibits in a beautifully crafted and decorated cargo trike. He said:

“We’re grateful for the chance to participate in what was a wonderful parade around the centre of Cambridge with bells ringing and everyone stopping to look at us as we went round. Great fun and fantastic to see so many different shapes and sizes of bike carrying so many different things. When we take our mobile exhibition to Market Square, people are often just as interested in the bike as in the museum. It’s the best way to move things around in the centre of an ancient city, that’s for sure.”

Camcycle is already gathering ideas for next year’s Cargo Carnival and would love more local businesses and organisations to be involved. If you’re interested in bringing along a cargo bike stall, demonstrating cycles in the tryout or sponsoring the event, get in touch with the charity at contact@camcycle.org.uk